I did my bartending Tour Of Duty at a bar called FREVD in London’s Soho between 1990 – 2001. The late 80’s did a great disservice to the world of cocktails, with the massive popularity of premium bottled beer. A disservice to beer in general as well… but I digress.

My workmates and I got bored of spending evening after evening opening bottles of Sol and shoving a lime in the top, so we started serving rudimentary cocktails. Cheap, large, simple and most of all… good. We diversified and started making up a few of our own, but nothing to the caliber of the great Dick Bradsell though (we were fans, and I’d often hang out in Fred’s most evenings, he’d ask me how I felt, and then I’d drink whatever he gave me). Some of the drinks we made up still exist on the menu board at FREVD, go look.

Anyways, I love to make a cocktail at the end of the day, and my only main clientele used to be my cat Ferris who sat on a bar stool at my kitchen counter. He didn’t have a favourite drink, he just liked to watch.

Unfortunately, my favourite Barfly Cat Ferris succumbed to a tumour over the 2017 Christmas season and died in the new year. It was a massive loss to me as he was a superb late-night friend, but one of my cycling friend’s cat ended up having kittens that spring and my new #barflycat was born in the moors of Devon.

The name I appropriately called her was Drinks, and she has gone on to give birth to a pair of offspring who I would have preferably named Vesper and Mai Tai, but it was my wife’s turn to name them so they are now named Dave (after a friend who was born on the same day) and Barbra (because if we were going to call Dave, well, Dave, then my wife’s word association the led on to her family friends Dave and Brenda, but that was too weird, so we amended it to Barbara, and then Barbra because that’s how Barbra Streisand spells it).

Drinks has now adopted the curious Barfly Car position, by sitting on the barstool while I shake a cocktail, and I hope that her offspring adopt the same behaviour.

The side story is that Ferris had a sister named Jeannie, and she naturally took over his position whenever he wasn’t around. She also still fills in the spectator gaps, but she’s understandably a grumpy old cat, who is also part of my welcome audience. 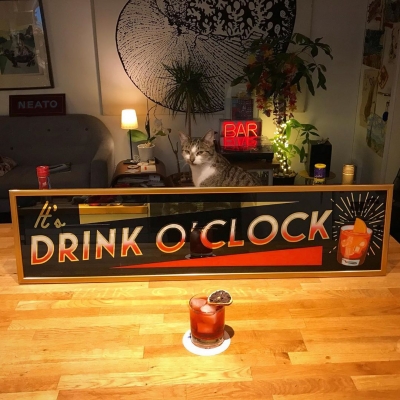